Cricbuzz - THE Cricket App About

The best Cricket app just got better. Cricbuzz - THE Cricket app, created by the same folks at Cricbuzz.com, gives you a unique and unmatched... 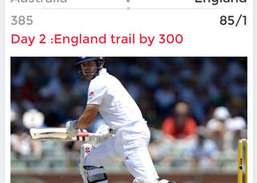 The best Cricket app just got better. Cricbuzz - THE Cricket app, created by the same folks at Cricbuzz.com, gives you a unique and unmatched experience of following cricket on your iphone. With comprehensive live coverage of all international matches, T20 leagues (IPL, CLT20, Big Bash, CPL, BPL etc..) and major domestic tournaments, you will never miss out on anything that happens on the cricket field.New and Noteworthy features:Universal App - This is the first truly universal iOS app from a major cricket site. The same app works on both iPhone and iPad.Smart 'Match Center' - Match Center screen adapts to the state of the match - Upcoming, Live or Complete.Match Cards - Contextual snippets like stats/trivia/weather. Following a cricket match will not be the same again.Unified Home Screen - The new, enhanced Home Screen has all the interesting content of the moment - Featured matches, News & Photo Galleries.Map View for Matches - Matches spread out on world map gives you a unique and compelling experience.Other features:Live score updates and ball by ball text commentary that helps you visualize the action as and when it unfolds.Live Audio commentary in English and other regional languages - if listening is your thing.Match alerts via push notification service - so that you don't miss THE momentLatest cricket news and editorials - to keep you posted on the latest happenings.Upcoming matches - what's up for tomorrow, next week, next month?Results of recently completed matches - in case you missed a match.Photos - because a picture is worth a thousand words and all that.Player profiles - Cricket is all about the players - runs, wickets and everything else.Player and Team Rankings for ODI, Test, and T20I - know the current ranking of your favorite player, always.Points tables for all major tournaments - which team is at the top and who well get knocked out?Whether you are a seasoned follower of the game (followed Tendulkar since his debut?) or a new fan (did T20 pull you in?) Cricbuzz app has you covered.

This app offers Live Coverage of all the IPL matches.Here is the full feature list -Live score scorecard -Ball by ball commentary-Result of past...

Yahoo! Cricket is the best place to enjoy the game of cricket (and not just follow) on the web, and now you can do that on the iPhone too. This app...

Live Cricket TV HD is an application which provides you live cricket matches score, commentary, fixture etc. Not only cricket we also provide you...