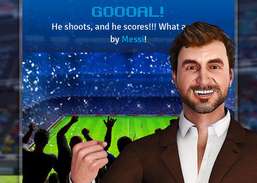 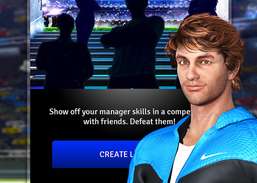 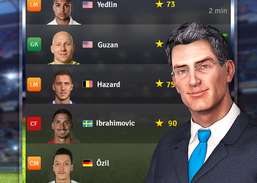 Play the France Euro Cup 2016 in Golden Manager! Your favorite soccer manager game adds all the elements so you can enjoy European soccer at its best, until July 10th. We bring you an exclusive Eurotour to celebrate the Euros, a unique event that only happens every four years. Beat the best European national Soccer teams, become the European Champion and lift the special Golden Manager trophy for the Euro Cup 2016. You will find Cristiano Ronaldo, Zlatan Ibrahimovic, Cesc Fbregas, Paul Pogba and a long list of the best European soccer players that will be playing in France, on the Market. Furthermore, you can enjoy exclusive offers to sign your favorite players.Golden Manager is an online soccer game with top real soccer players from the best major leagues where you will be able to create your own club and compete against users from all over the world in order to make history as a soccer manager. Manage new signings, training sessions, your teams tactics and ticket prices. Enjoy live matches every day and decide on the changes to make, the intensity and the mentality of your team in order to defeat your rivals and make your team an unstoppable winning and goal-scoring machine.Start with a basic team, become a better and better manager and do not stop until you have a top team! Place the highest bids in the auctions to get those players you think are indispensable for your game tactic. Make your team with the best eleven FIFAs players and score amazing goals!Have your team qualify for the major tournaments in Golden Manager: Champions League, Challenge League or Kerad Tourney. Just a few managers can exhibit these trophies in their Trophy Room! - Cross-Platform - Sign real soccer players with FIFPro license. - Get promoted in the League until you reach Golden categories. - Train your team before each match. - Exciting live matches against managers from all over the world. - Major tournaments: League, Champions League, Challenge League, Kerad Tourney and GM Cup. - Real sponsors to reinforce the finances of your Club: Nike and Coca-Cola.If you think you can do better than Mourinho, Guardiola, Low, Van Gaal, Ancelotti or Luis Enrique, now is the time to show it. Create your soccer club right from scratch and demonstrate your talent as a manager. Configure the best team by signing Messi, Cristiano Ronaldo, Gerard Piqu, Rooney, Courtois, Dani Alves, Marcelo, Arturo Vidal, Gareth Bale, Iniesta, Pogba, Neymar, Luis Surez, Kun Agero, Cesc Fbregas, David Silva, Alexis Snchez, James Rodrguez or any other top player from the best FIFA clubs that you may consider indispensable to make your starting eleven unbeatable on the field and score more goals than your opponents!Train your team before each match by strengthening the attacking, passing and defending skills that help your players defeat your rivals. Analyze your opponents match by match and choose the best tactic to counteract your rivals qualities. When the time of the match comes, you will play at least one every day, manage the substitutions that can make the team improve minute by minute in order to achieve the victory. Decide on changing the mentality and intensity of your players to correct the different stages of the match. Make faster decisions than your rivals and show that your talent stands above the rest.Start to make history in Golden Manager as a soccer manager!An active connection to the Internet is necessary to play Golden Manager.Please note: Golden Manager is free to play, but it contains items that can be purchased for real money. It's optimized and works best with iPhone 5 and later and OS iOS 8.0 and later.Privacy Policy:http://support.goldenmanager.com/hc/en-us/articles/201870681-Privacy-PolicyTerms of Service:http://support.goldenmanager.com/hc/en-us/articles/201870671-General-Conditions

End of Summer Sale. Get the full version today for only 99 cents! Dust off those tennis racquets and start training with the Pros. This Free...

Join over 150 million players worldwide to become the best soccer manager with the unbeatable excitement of Top Eleven.

Play with over 100,000 sports crazy gamers on CricBattle.

From amateur to PRO.