Now fully supporting the Retina display! Critically acclaimed by the press and players alike: PES 2011 is the highest-rated football simulation... 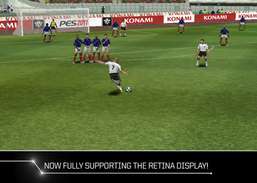 Now fully supporting the Retina display! Critically acclaimed by the press and players alike: PES 2011 is the highest-rated football simulation that works on all Touch devices including older generations, according to iTunes reviews! Experience the new PES 2011 and discover a wide range of improvements for which lots of ideas from the PES community have been taken into consideration and implemented.Features:- New Multiplayer Mode: Challenge your friends anywhere and anytime in local Wi-Fi and Bluetooth matches- Advanced realism: The further improved AI allows even more control over the play. New animations such as referee cut-scenes or goal celebrations and technical moves (diving header, bicycle kick, and more) offer an even greater level of realism than before- Graphical enhancements: New stadiums, pitches and weather effects provide the perfect visual environment for exciting matches- Exclusive UEFA Club Competitions: PES 2011 includes many of the best European club teams in the officially licensed UEFA Champions League and UEFA Europa League modes. Winning both competitions will also allow you to participate in the UEFA Super Cup FinalAlso available on the App Store: Get Konamis brand new exciting Touch-Action-Game Laser Dance Robberies and become the master of all thieves! Avoid the laser beams, snatch as many exhibits as possible, and go for the record!
Download

APP STORE EDITORS CHOICE! Weve been picked as an App Store Editors Choice! Thanks to all our fans for making FIFA 13 a worldwide hit.The most...

The unrivalled and critically acclaimed football simulation is entering a new season! The latest data which is reflected winter transfers and...

The best parkour-inspired action game on iOS is now FREE.

Lead your team to Premiership glory in the most realistic AFL experience on iPhone and iPad. Play online and dominate your rivals in real time...

Practice athletic winter sports in a realistic 3D environment through 28 events and 8 competitions.